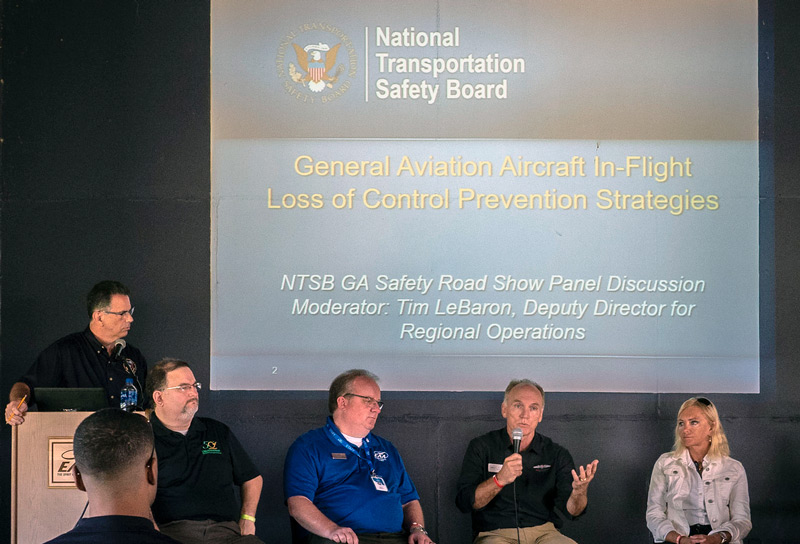 On April 24th, 2018, the NTSB convened a round table in Washington, D.C. involving experts from various areas of aviation to provide different perspectives on Loss of Control In-flight (LOC-I): the leading cause of fatalities in General Aviation and every other sector of aviation in the U.S. and worldwide. At the 2018 Experimental Aircraft Association (EAA) annual gathering in Oshkosh, Wisconsin, the NTSB again put LOC-I center stage with a roadshow again focused on the subject of LOC-I.

The NTSB wisely maintains a heavily focused spotlight on LOC-I. The threat of LOC-I in General Aviation has been on the NTSB’s Most Wanted List for many years, and numerous safety recommendations on the topic have been issued to address their safety concerns. Despite this continued emphasis, LOC-I persists as the leading cause of fatalities in aviation. Why?
In 2014, after several years of analysis by two groups separately evaluating approach/landing/departure and en route phases of flight, the General Aviation Joint Steering Committee (GAJSC) LOC-I Working Group published its final report. . Surprisingly, although 9 of the 34 recommended Safety Enhancements are related to education, awareness, or training, none of the areas of emphasis involved training that had not previously been advocated by the FAA and industry. In the Safety Enhancements identified after years of study, the LOC-I Working Group’s conclusion seemed to be that existing training is adequate — we simply need to do it better, and do more of it.

To be clear, all of the Safety Enhancements identified by the GAJSC are valuable to an extent, but they all assume that relatively minor adjustments to the current training system can somehow fix the LOC-I problem, our number one threat. This is hard to reconcile given facts and statistics that continue to show that although LOC-I can be generated by many different causes, deficiencies, or reasons, it is a disproportionately the largest cause of fatalities. Could it be that the LOC-I problem is related to what seems to be dogmatic assumptions that are commonly held throughout the aviation industry that are not true and do not work when it comes to aircraft upset events?
As an example, other than one full stall during the Private Pilot flight test, existing civil licensing training does not require pilots to ever fly outside of the standard operating envelope of a normal category aircraft. Is that level of training sufficient to provide the capability or proficiency a pilot might need in an aircraft upset? Having never been outside of the normal envelope before, will pilots in an unanticipated upset event fully comprehend the flight condition they are in and be able to perform in a reliable and predictable manner? The accident record seems to indicate that current training, which emphasizes what pilots need to do to remain in the normal envelope is insufficient to keep them there, nor is it adequate to teach recovery from situations pilots have never seen before. Maybe we need to look at this issue in a different way.

At the NTSB event in Oshkosh, former U.S. National Aerobatic Champion and current Airshow Performer and Instructor Patty Wagstaff offered her summary of the problem when she said, “I don’t think these are actual mistakes. I don’t think this problem is about pilot error, but rather a training system error. You can’t blame the pilots of Air France 447 or Continental 3407 for not knowing what they didn’t know. These pilots were simply products of the system.”
At APS, we agree with Patty’s assessment. If it is true that our current pilot training system is inadequately preparing pilots for unexpected airplane upsets, then more of the same training will not significantly change the accident results that we see now.

The Cure: A Risk Management Approach

Despite valuable contributions from technical innovation addressed by the panelists, there was also a general consensus that there is no technological Silver Bullet that can significantly reduce LOC-I across the board. In the end, the Pilot in Command is the last line of defense if an upset occurs which could lead to LOC-I. There was general agreement among the panel that appropriate training was the most reliable and robust means of improving the LOC-I accident rate. So what constitutes “appropriate training”?
In the context of preventing and recovering from upsets, the best way to answer this question would be to apply the tried and true protocol that has been used throughout aviation industry: Risk Management. It may sound complicated, but Risk Management is simply a matter of identifying threats or hazards, and corresponding ways to reduce, mitigate, or eliminate them. In the case of LOC-I, the NTSB has worked hard to identify and sound the alarm. Through the prevalence of LOC-I as the leading cause of fatalities we can clearly see that existing training is not up to the task.
The good news is that the solution — the best way to manage the risk and mitigate the threat — has been identified as well. The FAA’s own Loss of Control Avoidance and Recovery Training Aviation Rulemaking Committee made seven recommendations following a year of research and analysis by experts from around the world. One of their recommendations was to provide Upset Prevention Recovery Training (UPRT) in actual flight at the commercial pilot licensing level on light airplanes which are capable of performing recommended maneuvers while maintaining acceptable margins of safety.
This is at odds with the 34 recommendations previously made by the GAJSC LOC-I Working Group, as UPRT is only currently required at the Airline Transport Pilot and Part 121 Airline level. The LOC-I accident rates and threat will continue to be discussed at forums, roundtables, and roadshows. Meanwhile, for those that wish to take a Risk Management-based approach to solving the problem, professionally delivered, comprehensive UPRT based in factual and predictable aerodynamic and behavioral characteristics, as well as human factors considerations in time-critical, life-threatening situations improves the ability to prevent upsets by building recovery skills. This approach results in more capable, resilient, and confident pilots.