Review the Original Article at Flightglobal: APS Training Offers Pilots Real Experience of Upset Recovery
A July 2009 report compiled by Boeing indicates that loss of control is the leading factor in fatal commercial aviation accidents, resulting in 1,991 fatalities. Controlled flight into terrain was second, with about half as many incidents, resulting in 961 fatalities.
Paul Ransbury, president of Phoenix, Arizona-based Aviation Performance Solutions (APS) and a former Boeing CF-18 fighter pilot for Canadian forces, says that when combined, loss of control and system component failure represent about 40% of all commercial aviation fatalities.
Ransbury, who founded APS after military service and three years flying airliners, says many pilots are unaware of the prevalence of loss of control in fatalities. However, the introduction of Aviation Circular 120-109 and Public Law 111.216 has led the aviation industry to start taking more strenuous action to counter the threat of upset conditions. 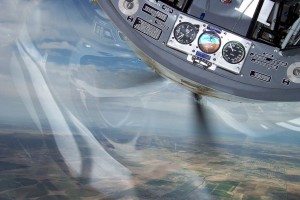 Ransbury says the recent focus on upset prevention and recovery training has prompted growth at APS and it plans to open a second training centre next year in Dallas, which will be led by Randall Brooks, the company’s vice-president for training and business development. APS is also developing training locations outside the USA.
Ransbury, who has flown thousands of hours and has extensive instructor pilot experience, says: “The leading loss-of-control-in-flight event is the stall.” Nearly half of all loss-of-control fatalities are directly related to inappropriate pilot reactions to stalls. The underlying problem is that most pilots – with the exception of certain military aviators, certification test pilots and a few others – only experience full aerodynamic stalls early in the licensing stage of training.
Furthermore, during normal operations most civilian pilots only experience a fraction of the all-attitude flight environment to which an aircraft can be exposed. The all-attitude environment includes 90˚ nose-up, 90˚ nose-down, and 180˚ bank angles in either direction. Upset conditions begin in a roughly defined “box” where the bank angles exceed 45˚ – 25˚ nose-up and 10˚ nose-down for large jet aircraft. “The challenge is that box represents less than 5˚ of the all-attitude environment,” Ransbury says.
Most pilots will spend at least 99% of time in the air within the normal operating envelope. As such, most pilots lack experience in dealing appropriately with upset conditions which exceed these confines. Moreover, civilian pilot training programmes have traditionally focused on operating within the normal flight regime. “The training that a pilot receives does go beyond those limitations, but it’s not too far,” Ransbury says.
Typically, pilot training does not cover much more than 10% of the all-attitude environment – up to 30˚ of pitch and 60˚ of bank. The result, Ransbury says, is that most commercial pilots are not adequately trained to deal with upset conditions should they experience them. The skills a pilot may develop during thousands of hours of operations under normal operating conditions may not translate to the all-attitude, all-envelope upset environment.
“The unfortunate part is the skills they have that are effective – and that they have thousands of hours of proficiency in, and years of training – the further it gets outside of that box, the less applicable they are to actually solve the situation,” Ransbury says. “Very often, they can make the situation worse.”
These hours can create a barrier to learning the new and necessary skills for resolving upset conditions. To solve the problem, APS has developed a pilot educational programme dedicated to upset conditions. Specifically, while it focuses pilot training on recognition and recovery techniques, the programme also educates pilots on aerodynamics nearing the stall, during the stall and after the stall. “Recovery is only a portion of the training we provide,” Ransbury says. “In reality, what we’re trying to provide is an enhanced awareness and the capability for a pilot to prevent or intercept these developing events before they get to the point where they need exceptional skill.”
Overcoming human psychology – the ­startle/surprise factor – is one key to solving typical, and often incorrect, pilot reactions during upset conditions. APS says its training gives pilots the opportunity to experience upset conditions while flying a real aircraft, essentially overcoming thousands of hours of learned behaviour that may not translate to upset conditions. Further, it reinforces skills with a simulator. The idea, Ransbury says, is to impart a strategy in the pilot’s mind on how to recover from an upset by experiencing it in real flight. “We’re talking about giving them fundamental basic gross skill to get the airplane back into the environment where their skills apply,” Ransbury says.

Upset recovery training at APS starts in an Extra 300 aerobatic aircraft and moves to a simulator, the opposite to most pilot-training programmes. Brooks, a highly experienced instructor, says simulators do not adequately replicate certain essential physical cues during upset situations. 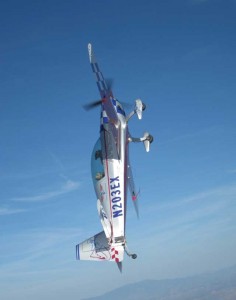 Although there is a huge difference in size and performance between an Extra 300 and a typical airliner or business jet, certain skills developed in the nimble machine can transfer to many fixed-wing aircraft.
“Upset prevention and recovery skills – the majority of them are not aircraft-specific,” Brooks says. “The aerodynamics [and] the principles generally apply across the board.”
The Level D simulator – a CAE device replicating an Embraer EMB-145 or Bombardier CRJ200/700/900 – is used in a generic role to reinforce the airborne training in a cockpit environment more familiar to students.
Clarke McNeace, APS vice-president of flight operations and standards, says the company has developed an all-attitude upset recovery methodology that should enhance a pilot’s ability to recover an aircraft from most departures from controlled flight. The key is to emphasise regaining aircraft control over minimising altitude loss – a reversal of the traditional focus of trying to maintain altitude.
As a result, APS training focuses on reducing the angle of attack on the aircraft’s wing. All wings stall and lose lift once they exceed their critical angle of attack. The best way to reduce the angle of attack is to “unload” the wings by pushing forward on the stick, ­McNeace says.
Thus, APS’s all-attitude upset recovery technique consists of a structured response that organises a pilot’s reaction to the major factors, which must be addressed in any aircraft upset. This response is applied through vocalisation of the areas that are considered: push, power, rudder, roll and climb. These steps help the pilot to correctly assess angle-of-attack management, energy management, appropriate yaw inputs, lift-vector orientation and flightpath control. APS does not claim this strategy is a “fix-all” technique that applies to all situations, Brooks says. It is simply a process to help pilots organise their mitigation strategy in a crisis that necessarily integrates their knowledge of a specific aircraft’s unique performance characteristics, he adds.
McNeace demonstrated the technique in an Extra 300. Indeed, most upsets can be quickly and easily corrected by using the strategy. Perhaps the most eye-opening demonstration of the effectiveness of unloading the aircraft’s wing was when Flight International had the opportunity to perform a zoom climb during which, under McNeace’s instruction, the wings were unloaded by pushing forward on the stick and flying the aircraft under perfect control 20kt (37km/h) below its level stall speed. The aircraft flew so well, aileron rolls could be performed in both directions with ease.
There was also an opportunity to practise high-altitude stall recoveries in the EMB-145 simulator, the technique proving effective in recovering from the beginnings of a stall. Such a high-altitude approach to the stall regime – a thrust-limited condition – is a great example of the final stage of the prevention and/or recovery process often needed to initiate a controlled descent.
McNeace notes that in some situations, even if a pilot does everything correctly, it may not be enough to save the aircraft – but he says the techniques taught by APS give a pilot a fighting chance.

TRAINING PROGRAMMES IN DEVELOPMENT FOR UPSET AVOIDANCE AND RECOVERY

The International Committee for Aviation Training in Extended Envelopes (ICATEE), initiated at the Royal Aeronautical Society, is developing a manual of upset prevention and recovery training for ICAO.
The manual will have sections for pilots, instructors, training providers and regulators, and will become the basis of ICAO standards and recommended practices in ICAO Annex 1 and 6.
ICATEE chairman Sunjoo Advani says specific text will also be added to existing ICAO safety manuals, including adding associated demands for the improvement and best use of flight simulation training devices (FSTD).
ICATEE’s identified training requirements for upset prevention and recovery indicate training in FSTD can be effective “for the majority of learning objectives”. But it explains that “a small but essential portion of the learning elements” must be acquired in aerobatic-capable aircraft, as “simulators are not capable of providing the ﬁdelity required (g-cueing magnitude and accuracy)”. It adds that while this deviates from most professional training, its delivery makes this “both an effective method of risk mitigation and an essential element of the ICATEE strategy”.
Some flight training organisations such as Oxford Aviation Academy embed two or three hours of training in aerobatic-capable light aircraft as a part of its consolidated ab initio air transport pilot or multicrew pilot licence courses, even though it is not a legal requirement. This provides the introduction to flying at or beyond the flight envelope that ICATEE recommends, since simulation cannot provide all of this.
The general agreement of the definition of a flight upset in an airliner is a situation in which any or all of the following attitudes apply: more than 25˚ nose up, more than 10˚ nose down, or more than 45˚ bank, but still within the flight envelope. Clearly, exiting the flight envelope from a seemingly benign attitude – for example, when a stall develops from a straight and level attitude – or having developed an unsustainable total energy situation in flight, are also upsets. These, too, are defined.
An aerobatic aircraft can go far beyond the defined attitudes, and can exit and re-enter the flight envelope. Care also has to be applied to prevent “negative training” – techniques that work in an aerobatic-light aircraft, but would damage an airliner.